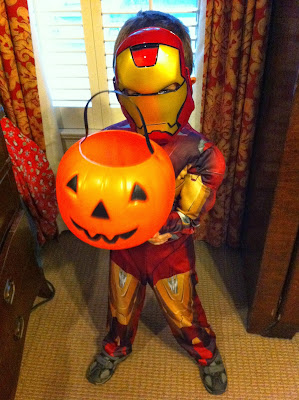 I’ve recently realized that my son, whom we affectionately call Hurricane Luka, is not following the guidelines set forth in my chosen edition of the parenting manual. I’m talkin’ about the old manual. The one that says “have some kids to make your life easier”. I think it might have been originally written for farmers. With crops. And livestock. And wood to chop and whatnot. Those kids who, when you say “Fetch that for me would you son?”, they say “Yes M’am.”

This realization hit me again right between the eyes last week when Hurricane and I sat down to discuss the upcoming Halloween candy madness, and what he was going to wear to the festivities. I of course, being the mommy-who-is-on-the-ball, was prepared with a huge trunk full of over a decade of Halloween costumes, school dress-up day costumes, costumes from plays, neighbor kids, and thrift stores.

“Luka, what do you want to be for Halloween, sweetheart?”

Focusing his attention away from Mythbusters for three seconds he looks me in the eye and says “I wanna be an isotope.”

“Um. Huh. What? How do you know ‘isotope’? And what does that look like?” Thank you to The Simpsons for that delightful yet intangible new vocabulary word. Go Springfield. Yeah.

“Duh. They're swirly.” Says Luka, and he whirls his finger around like a tornado. It also kinda looks like he is giving me the international hand sign for “Crazy Lady”.

On the ball. On the ball. “Oh, hey, how about a pirate? Look, we already have an awesome sword and an eye patch. Even a cape. All right here in the costume box” I offered.

“That Captain Hook guy got eaten by a crocodile. No dice, mom.” Did I mention that because Hurricane has a 13-yr-old brother he also has a 13-yr-old grasp of common colloquialisms?

“Would you look at that? We even have a Peter Pan vest, hat, and cute little knife. Green tights too! You can be Peter Pan! Remember, he beat the pirate!” I responded enthusiastically. My whole goal here is to dress the boy for Halloween without additional cost or effort. I have to save what little energy I have for mentally willing the boy to get a happy face at preschool every day.

Now we’re getting somewhere. “Hmmm. We don’t have a Superman costume, honey. We have Spiderman. Even Batman. And he’s got a nice 6-pack. See?” I hold up the little Batman costume. It’s a full body suit with pre-formed pecs and indeed a nice 6-pack.

“No, mom. Superman. You can make me a costume. You are a genius. You are a pretty princess. Make me a costume please mommy sweetheart. You can do it” he purrs, cocking his head to the side and blinking his long eyelashes at me slowly. I see that Luka fully grasps the concept of sucking up.

“While it is true that I own a sewing machine. And it is also true that I have used said sewing machine on occasion. At this time…I don’t feel that…um….well…Oh! Wow! Look! It’s a Stitch costume! With 4 arms! I could be Lelo and you could be Stitch, Luka! Isn’t that a great idea?” I say this quickly, running out of options, before I realize that being Lelo would probably require me wearing a grass skirt. In public. Oi.

At the end of my rope, and exhausted from my unsuccessful sales pitch I admit defeat. I am not as on-the-ball as I thought. “You know what Luka? How about we sleep on it. We’ll think about Halloween costumes for a day. Then we’ll figure it out. Ok?”

I still have one more day.
Posted by Mommy's Wish List at 8:30 PM