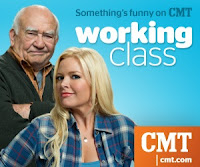 Last night I got a sneak peak at the upcoming new series "Working Class" which will start on Friday January 28th at 8pm EST on CMT. As a TV junkie, I was excited to see something new before every body else does!

WORKING CLASS centers around the life of blonde-zilla Carli Mitchell (played by Melissa Peterman), a single mom from "the wrong side of the tracks", trying to give her kids a better life by moving them "the right side of the tracks". Her slacker brother (played by Steve Kazee) lives with her, and pretty much adds to her burden more than lifting it. And she works in a very posh grocery and take-away store, which could day-in and day-out make her crazy looking at all the groceries that she can't buy. I empathized with her as she stared out at the yoga moms with their perfect bodies sitting and having lattes in the middle of the day, asking "Why can't that be me?"

The clash of cultures obviously prompts possible uncomfortable situations in which Carli prevails using her unsinkable nature. The scene stealer is her cranky neighbor, Hank (played by Ed Asner), who uses war metaphors to explain everything in Carli's life. He is quite the lovable curmudgeon and I found myself waiting with anticipation to see what would come out of his mouth next. He's blunt, like all of my favorite TV characters, but he also knows how to work the system and "stay under the radar".

She unknowingly spills her guts at the sandwich counter to a frequent shopper she has had her eye on. Turns out, it's her boss, Rob (played by Patrick Fabian, one of my faves from Big Love). And, much like the heroine in one of my favorite movies, Working Girl (with Melanie Griffith), Carli uses her common sense, big heart, and moxie to turn faux-pas into fois-gras. I'll likely be tuning in on Friday nights to see how she fares.

Mommy's Wish List disclosure: One2OneNetwork on behalf of CMT provided me access to watch the preview of the first episode of Working Class to facilitate my review, and compensation for my time to review it. This review is my opinion, and it was not reviewed or edited by anyone.
Posted by Mommy's Wish List at 8:23 AM