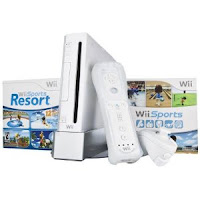 For a limited time from Kmart.com, you can get a Wii Console Bundle, which includes the Console, Wii Remote Plus Controller, Nunchuk Controller, Wii Sports and Wii Sports Resort, and Motion Plus for only $179. You can get this deal starting Sunday morning the 20th thru Saturday the 26th here.

We got a Wii for the family for Christmas. What is Luka's favorite thing to play? He plays in the Mii Plaza. For hours. This is where you make little people to play the game as. Most people make one little person of themselves (your Mii) to play the games. Luka has made every single person in his PreK class, all his cousins, and now when he meets someone on the playground, he comes home and makes a Wii of them. It's his little collection of people he knows. Who knew that would be one of the "games" to entertain a 4-yr-old on a Wii.