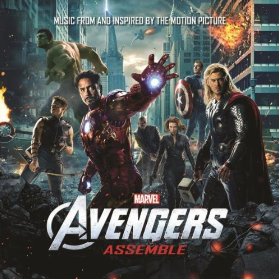 Download the 13-song album Avengers Assemble from the movie The Avengers from Amazon for just $5 here. Act quickly, because prices on Amazon can change without notice.

Hello Scott Weiland, where have you been? Haven't seen you since I was 7 months pregnant with Quinn. Yep, I went to STP mucho pregnant. I've been jonesing for a great 90s-angst-style album. And here it is. *sigh* It's just like I'm back at Webster Hall in NYC. Obviously, the superheroes of the world do their superheroing to angst music. I know I do.

What's on this album?

1. Live to Rise by Soundgarden
2. I'm Alive by Shinedown
3. Dirt and Roses by Rise Against
4. Even If I Could by Papa Roach
5. Unbroken by Black Veil Brides
6. Breathe by Scott Weiland (WOW)
7. Comeback by Redlight King
8. Into the Blue by Bush
9. A New Way to Bleed by Evanescence
10. Count Me Out by Pusherjones
11. Wherever I Go by Buckcherry
12. From Out of Nowhere by Five Finger Death Punch
13. Shake the Ground by Cherri Bomb

And, don't forget you can get your free iTunes song download of the week here.