Catch Me If You Can musical caught me. 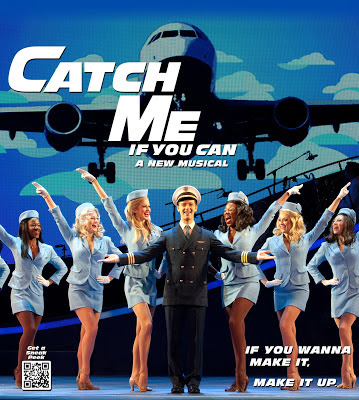 Frank Abagnale Jr: substitue teacher, pilot, doctor, lawyer. Teenager. This week, Catch Me If You Can, the musical, opened in Dallas as a part of the Dallas Summer Musical series. Dallas Summer Musicals brings traveling companies of Broadway Shows to Dallas, as a part of a national tour. Catch Me If You Can is kicking off it's national tour in Dallas.

Having seen the movie starring Leonardo DiCaprio and Tom Hanks, I knew the storyline. Teenager cons and forges his way into FBI criminal history. All those jobs I mentioned above? He pretended, successfully, to be all of those people before he even turned 20. 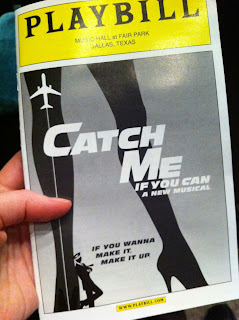 It's a remarkable story full of intrigue. And, with this kid's heart of gold and obvious superior intellect, you can't help but pull for him. He's Neal Caffrey from White Collar, and Mike Ross from Suits, both on the USA Network, rolled into one. And in this version, he also has the golden voice of Gene Kelly and dance moves of Fred Astaire.

It was absolutely delightful to see the story presented in this musical format. The show is staged as if it were a variety show from days gone by, with Frank Abagnale Jr as the witty and charming host. His back up singers and dancers appear in each con as stewardesses, nurses, night club dancers, southern belles. The stage has a movie screen with continuously changing titles, photos, and graphics, as if it were a television show, and a live stage band. With FBI agent Carl Hanratty, played by Merritt David Janes, hot on his heels and always one step behind him, Frank sings and dances his way around the world.

Stephen Anthony, who plays Frank Jr, and does a flawless job. I told him so during intermission. 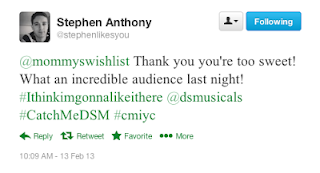 Frank finally decides to stop the con when he falls in love with Brenda, a nurse, who loves his vulnerability and good nature. The entire audience held it's collective breath during Brenda's (played by Aubrey Mae Davis) signature song "Fly, Fly Away" and cheered wildly afterwards, as I did, blown away by her performance.

It is such a treat to live in a city big enough to command such quality talent. Having lived in New York, I could see Broadway shows anytime. Having a sister who is a theater voice person in New York, doing that for a living, meant I saw musical theater all the time when I lived there. And I hung out with theater people. I have a soft spot for such talented, imaginative, brave professionals. And they are as much fun off-stage as it looks like they're having on-stage.

I've found one student special in Dallas for this show: With a valid student ID at the box office, you can get a $25 ticket available one hour before the performance as a part of their Catch Me If You Can Student Rush program. This deal is good on Feb 14 7:30 performance, and on February 19-21 7:30 performances.

I hope you enjoy Catch Me If You Can as much as I did. I'm looking forward to the rest of the Dallas Summer Musicals season!

Mommy's Wish List Disclosure: I am honored to have been a guest of Dallas Summer Musicals at the opening night of this show, so that I would be able to tell you all about it.
Posted by Mommy's Wish List at 4:22 PM