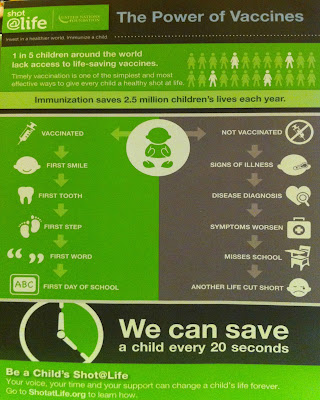 Shot At Life can save a child every 20 seconds.

This week marks the first anniversary of the non-profit organization Shot At Life. It is World Immunization Week, and Shot At Life makes it their mission to bring immunization access to the 1 in 5 children around the world who currently do not have access.

Many of us take immunizations for granted as a part of our children's well-care. But so many children around the world get sick, miss school, and even lose their lives to preventable disease. Many regular moms like me are championing this cause for Shot At Life. To celebrate their first year, Shot At Life is featuring some of their Shot At Life Champions on blogs like mine.

Champions receive training in media, advocacy, and event planning to become effective ambassadors for Shot At Life. Champions lead a grassroots movement in their community teaching the importance of global vaccines, organizing events to raise funds for United Nations programs, and meeting with Congress to encourage them to expand access to vaccines globally. 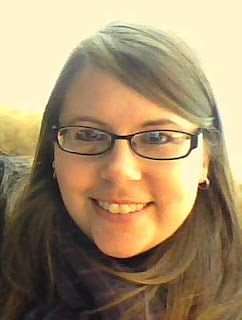 Christen told me that when Shot At Life presented at Mom Congress 2012, there wasn't a dry eye in the place, listening to the stories of moms walking miles and miles to make sure their kids had a shot at life via vaccinations.

She learned that these diseases were preventable, and children were dying from them. As moms, she thought we could all relate to doing anything we can to help our children. Christen at once knew she had to get involved. She signed up then and there to be a Champion, not even knowing what her plan was to help. And, she wanted her own kids to see the importance of helping on a global scale. 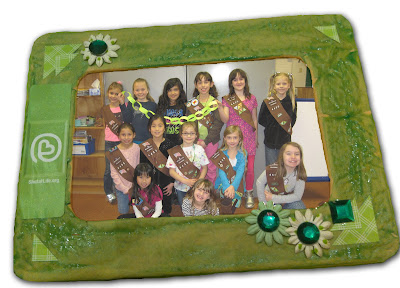 In addition to spreading the word about Shot At Life's mission, Christen got her Girl Scout Troop (Brownies, 7 & 8 years old) involved to raise funds for Shot At Life. This year's Girl Scout World Thinking Day's theme was reducing child mortality all over the world, and she thought that Shot At Life would be the perfect organization on which to focus their fund-raising efforts.

They decided, as a troop, to raise money for these kids. The girls decided to donate $260 from their cookie sales to Shot At Life, saving one child for each girl in the troop! In addition, they held a "Shot At Treats" sale at their local school, from which all of the proceeds will be donated to Shot At Life.

Christen hopes to continue raising funds and awareness, and saving kids through Shot At Life. She also hopes that the girls in her Girl Scout Troop continue to want to be involved as well. Ultimately, Christen would like to see these preventable diseases eradicated in developing countries. No one should have to suffer unnecessarily, especially kids!

How you can support Shot At Life.
Shot At Life educates, connects and empowers Americans to champion vaccines as one of the most cost-effective ways to save the lives of children in developing countries. A national call to action for this global cause, the campaign rallies the American public, members of Congress, and civil society partners around the fact that together, we can save a child’s life every 20 seconds by expanding access to vaccines.

By encouraging Americans to learn about, advocate for, and donate vaccines, the United Nations Foundation’s Shot At Life campaign will decrease vaccine-preventable childhood deaths and give children a shot at a healthy life. To learn more, go to ShotAtLife.org.