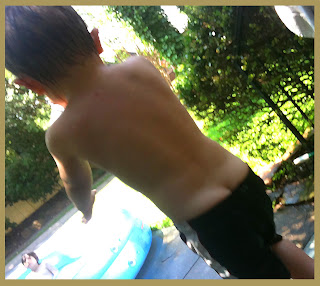 It is hard to keep pants on this boy.

Sunday is usually a day of rest, no?

No, it was far from a day of rest here. Early in the morning while Luka contentedly and quietly played in his room, I snuck downstairs for a cup of coffee.

Apparently it only takes one minute for a toddler to poop in his diaper, strip off all his clothes including said poopy diaper, run around his room flinging poop into every nook and cranny available, and then shout from the top of the stairs "Mommy, I want to wash my hands! They're poopy!".

Lesson learned the hard way: don't take your eyes off him for a minute.

Idea: Maybe diaper closures should be made of duck tape. Or super glue?

Bright side: I think this is considered my "window" for potty-training, right?


Nor was this the only "poop incident" of the day. There was yet another one involving one of those squished-up-and-out-the-top-of-the-diaper-and-all-over-the-floor events in the kitchen.

In an attempt to find some humor in this excremental day I dug around upstairs in the bookshelf until I found "Everyone Poops" by Taro Gomi, a super funny book from the 90s about pooping. It's iconic in the design world, and my boss at my old ad agency bought it for me when my oldest child was a toddler and had his own office at the agency. My toddler, not my boss. It was a decorated dishwasher shipping box. Quinn was for awhile the youngest intern in the agency. He even participated in agency brainstorms. And drew on the walls.

Bedtime was scheduled to happen right after we all finished watching the Simpsons, of course. (Luka plays with a set of "action figures" of all the Simpsons in the the bathtub.) So we snuggled down as a family to watch, while Luka ran around the living room in his third diaper of the evening.

Then, the planets aligned and the universe got to throw in it's two cents when, three minutes later, Bart Simpson and his best friend milktoast Millhouse were on the phone with Dennis Leary talking about the book "Everyone Poops" by Taro Gomi.

As I'm still holding it in my hand.

Very funny - of course only if it isn't your child doing the pooping and if it isn't taking place in your house. Pampers also had a potty training kit available here http://tinyurl.com/5wjygh

Thank you Heather! And I just found a printable coupon for $2 off Huggies Pull-ups! Obviously I'll be needing more of these.
http://www.pull-ups.com/na/pullups_coupons.aspx

Oh dear, I'm glad you can (in retrospect) have a sense of humor about it! My daughter handed me some poop first thing in the morning last Saturday, I feel your pain!

I feel your pain. It was poopy Sunday for me too, but mine was toilet rather than child related...this time anyway! And the pull-ups training kit came with a fun dvd, the pampers one with diego themed chart, sticker, and trophy!